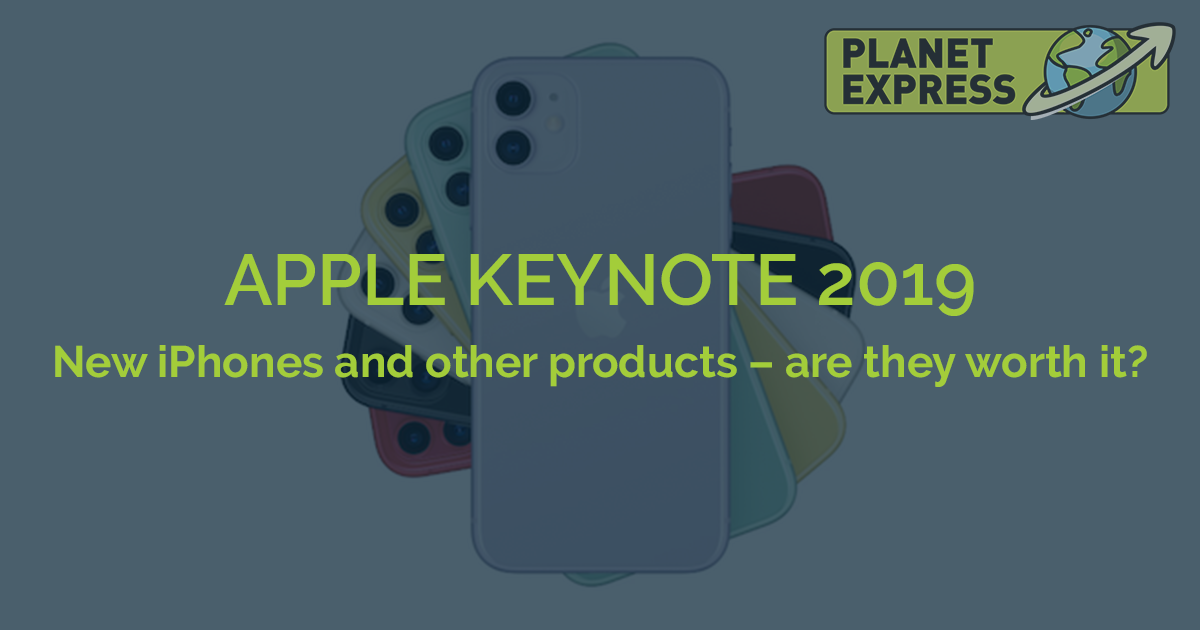 The year with the year has reunited, and just like last year, today we have an overview of the highlights of Apple Keynote 2019 that took place at the Steve Jobs Theater. Here is a little hint for you – it wasn’t just about iPhones but we saw a new iPad and Apple Watch as well.

Many leaks occurred before the official unveiling of this year’s iPhones. We knew design in advance (3 cameras on the back, the Apple logo in the middle), and partly also the iPhone naming (iPhone 11, iPhone 11 Pro, iPhone 11 Pro Max). Most of these leaks were confirmed on Apple Keynote 2019.

For a long time, we didn’t know what content is Apple going to stream on its Apple TV+ service. Now, we know the names of the first series and on the official website, you can also watch the first trailers. Apple TV+ will be available from November 1 and cost $ 4.99/month. It is important to note that this price includes family sharing for up to 6 members. If you get a new Apple product, you will get Apple TV + for 1 year for free.

Surprisingly, the iPad 6 gen., Respectively. was introduced its 7th generation with a 10.2-inch retina display. With the relatively new iPadOS and new support for Apple Pencil and Smart Keyboard, it is a handy helper for students or ordinary users who want to enjoy some multimedia entertainment.

iPad 7 is available in Space Grey, Gold and Silver color with 32/128 GB with Wi-Fi without and with cellular.

Apple Watch 5 presentation started with a short video, where the stories of people who use Apple Watch. For many of them, Apple Watch is a piece of technology that they enjoy every day. Apple Watch is the most popular smartwatch on the market, so it’s no wonder Apple wanted to present it properly. With “Apple Watch Saved My Life” stories etc.

One of the main innovations is the possibility of “always-on” display. Many of us were desperate for this function. Finally, we got it. Despite this, the battery should last up to 18 hours.

Cellular versions have the option to call the international SOS number in case of emergency. The watch will also alert you to a loud environment. These features only reinforce Apple’s focus on user health and safety.

We did not expect much surprises about this year’s iPhone. Many specifications were already known in advance. The appearance of the back lenses was particularly discussed. Some people call it “mutant”, “UFO” and even “hotplate”.

iPhone 11 could be considered the successor of the iPhone Xr. It has a 6.1-inch liquid retina display and newly 2 lenses (12MP Wide and 12MP Ultra Wide). This is a major improvement. We feel that this year’s iPhone has been developed with one main focus – the camera. It makes sense when Instagram and other social networks are so popular these days.

The new iPhones are all equipped with an A13 Bionic chip, which enables better software image processing, allowing the camera to capture stunning photos. We are looking forward to the first tests. Also, A13 should be the fastest CPU and GPU chip in smartphones ever.

Front cameras can now shoot in 4K and even slow motion. It seems that the era of “slowfies” is coming. iPhone 11 should also have an hour longer battery life than the iPhone Xr. iPhone 11 Pro (5.8-inch display) achieves even 4 hours longer life than its predecessor. The 6.5-inch iPhone 11 Pro Max pushes the border by as much as 5 hours.

Pleasant new features include a quick charger inside the package, Dolby Atmos support, or Spatial Audio to enhance the sound of video viewing.

The prices are not surprising either. They are very similar to last year’s models.

Will you buy some of the new products? Let us know in the comments on our Facebook page. You can also shop from Apple.com – here is how.