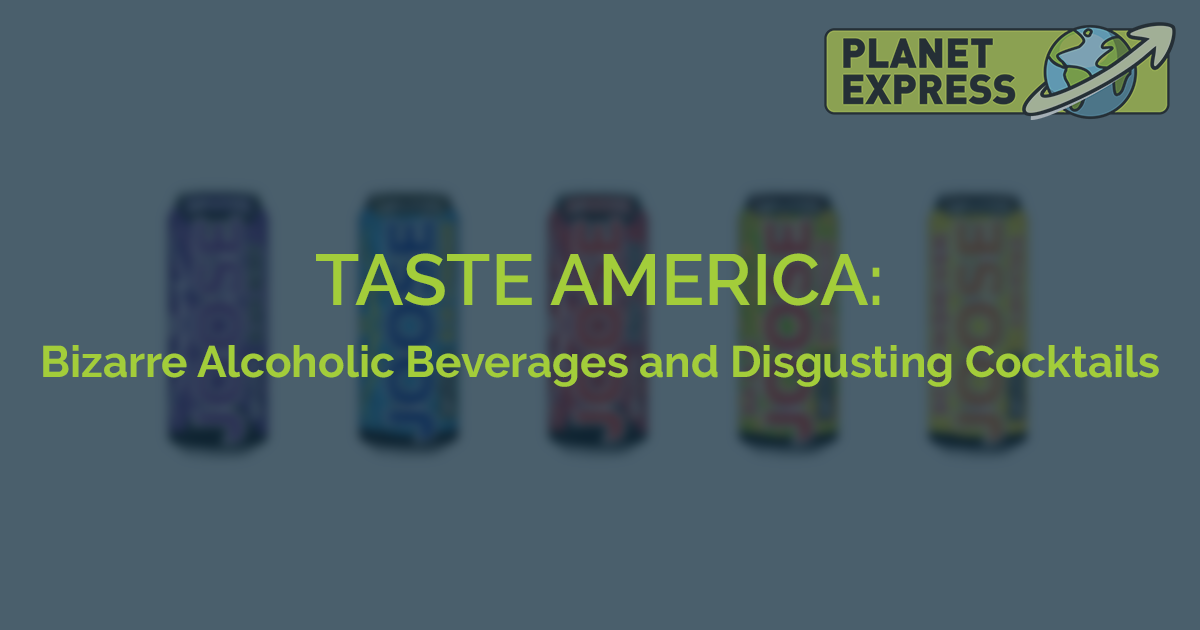 You can buy high-quality wine, beer, ciders and other alcoholic beverages in the US. Local bars usually offer great cocktails that you can even mix at home. But did you know that a couple of alcohol producers went too far? We are going to show you several alcoholic beverages that have been banned due to health risks, and also a few “cocktails” just for people with a strong stomach.

Caffeinated alcoholic drinks, began to be produced more massively around 2005. In the years that followed, they became more and more popular, especially among university students.

If you like energy drinks or if you read news from abroad, you may have heard something about the Ban on caffeinated alcoholic drinks. Around 2009, the Food and Drug Administration (FDA) warned 30 producers of these beverages. The producers were supposed to test their beverages and pay for studies. These studies should have answered the question of whether or not caffeinated alcoholic drinks are harmful to human health.

The situation escalated as early as 2010 when the FDA told to seven of these producers that their products were a “public health concern” and must not remain on the market in the same composition. The main problem was mainly caffeine, whose effect was supposed to “mask” real drunkenness. In other words, when you drank these drinks, you did not feel drunk, but the blood alcohol level increased dangerously. In a few cases, consumption had fatal consequences resulting in the death of young people.

We don’t want to scare you in this article. On the contrary, we want to share with you some interesting things. Paradoxically, as soon as the public heard of the ban on further production of these beverages, the true “madness” started. People went to stores, bought every stock left, and the retailers broke records in sales.

So, which ones of these caffeinated alcoholic drink are our “Best of”?

The name of the drink Four Loko originated after 4 basic ingredients (caffeine, alcohol, guarana, and taurine). Originally, this drink contained 12% alcohol and was available in 8 flavors. Three students, Chris Hunter, Jason Freeman, and Jeff Wright, noticed that many of their peers in bars were mixing alcohol and caffeine. They were inspired by that, so they invented the drink – Four Loko.

Four Loko is still available in these days, however, its composition is not the same anymore. You can consume Four Loko in a decent amount without any problem. And if you drink too much of it you get drunk. The next day you may get a headache and some stomach problems. What you are supposed to do now? Order Four Loko on Drizly.com and try it by yourself.

“Joose” also belongs to beverages that have been covered by controversy. However, the manufacturer came out with a new recipe (without caffeine). You can still buy Drink Joose in more than 20 flavors at some places in the US. Joose contains 9.9 %, 12 %, and 14 % of alcohol, depending on the flavor you choose.

Sparks was the first energetic beverage that contained alcohol. It was introduced in 2002 on the market. The design of the can, which resembled an AA battery, was particularly appealing. Thanks to that the purpose of the drink – a quick energy replenishment – was clear. The current version of both the beverage and the can is modified and Sparks is available in several flavors.

“The big four” is closed by Tilt. Originally it contained caffeine, guarana, ginseng, and alcohol. However, this recipe also had to be changed. Currently, Tilt offers the widest range of alcohol content (6.6%, 8%, 10%, 11%, and 12%). So, you can choose the alcohol volume according to your alcohol drinking level. You can choose from several flavors (strawberry, orange, grapefruit, lime, tropical fruit).

Of course, there were plenty of similar drinks on the market. We consider the above 4 to be the best known, also given that they are still available on the market (although in a modified composition).

You can use our American address to order and receive the above-mentioned beverages. When we receive the goods, you can select the delivery method from the US and we will send the package to your country for very attractive prices.

Get the US Address

Would you Ever Try the Following (Disgusting) Cocktails?

Today’s ride through the bizarre world of alcoholic beverages and cocktails is not over yet. Below are the “cocktails” for the toughest of you. If you are a fan of more traditional cocktails, read the article about traditional American cocktails instead.

You may have heard how a cough of the smoker sounds like. You’ve probably already seen a smoker’s lungs. It is not a nice view, right? Now imagine that this what inspired someone to mix Smoker’s Cough cocktail. Add mayonnaise to Jägermeister. Yes, right, mayonnaise! The result reminds the smoker’s lungs.

If you are a vegetarian or vegan, for your good, skip this paragraph. Baby Mice Wine is produced in a relatively brutal way. After birth, young mice are loaded into rice wine, where they ferment for 12 to 14 months. This recipe probably originates from Korea or China, and it is something we would never try. The wine should cure a lot of diseases but (unsurprisingly) none of these medical benefits were proven yet.

Put a fresh yolk in the gin, salt, and pepper … No, this is not the recipe for a pie, but a cocktail that doesn’t look as disgusting as Smoker’s Cough. It is probably the only drink in our selection that we would be able to try if we had to… And what about you?

We will stay with the eggs for a while. As the name suggests, this cocktail is made up of eggs and Jägermeister. Simply put the boiled eggs in the brine according to your recipe, let them rest for a few days, and then put the eggs in a glass with Jägermeister. Delicacy? Not much for the gentleman in the following video.

Yes, especially for us Germans, Czechs, and other beer nations, the idea of combining milk and beer is particularly painful. And what about when you see what the whole combination looks like? How could anyone even think of adding milk to beer? Considering the second, less used name, we consider this combination to be extremely disgusting.

In the video below, it is rather a variant of milk with beer. The opposite combination (more beer and less milk) seems more interesting to us just because of the way it looks.

Would you have the courage to taste any of these cocktails? If so, let us know in the comments on our Facebook.